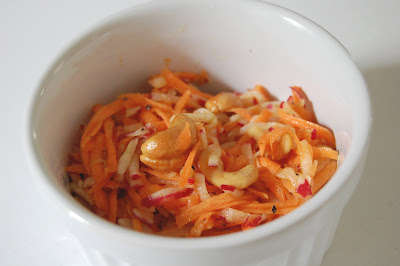 On Viva TV there are few cooking shows I try to catch from time to time. Simple Fresh Delicious is one of them. This will be the second recipe I have tried from her show. Beef Brussel Sprout Stir Fry was the first. Both are delicious. After making this dish I realized I forgot to add the green onions.

Place all ingredients in jar with a sealed lid and shake until well combined.

Place the carrots and radishes in a food processor with the grating disk.
Place vegetables in medium size bowl.
Pour dressing over and toss.
Add green onions.
Sprinkle cashews on top. 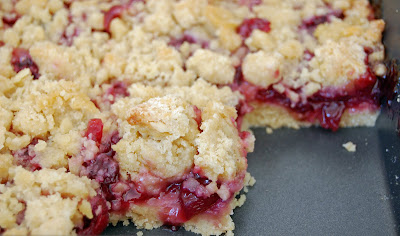 Another library cookbook; rustic fruit desserts. I had cherries I needed to eat up and this recipe seem to fit the bill. Any fruit would be good in this bar, Rhubarb will be next.

Combine flour, brown sugar, almonds and salt in food processor.
Add butter and process until crumbly.
Add egg and vanilla and pulse just until the mixture comes together.
Take out 1/3 of this mixture for topping.
Press 2/3 of the mixture into the bottom of the prepared baking pan.
Then add the cherry mixture.
Add the crumbly topping over the cherry mixture.

Bake on middle rack for 30 to 35 minutes.
Cool for at least 1 hour before cutting into squares.
Store in an airtight container.
Keeps for up to 4 days. 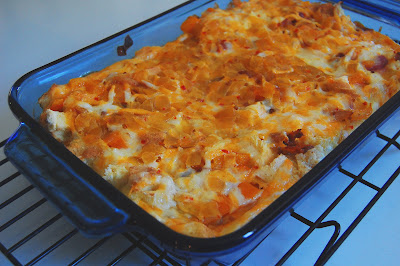 I saw this recipe and then went to find the zesty onion relish. This would make a wonderful Father's Day Brunch dish. The addition of the zesty onion relish made it so tasty. Dan did suggest that maybe the bread should be toasted before it is added to the baking dish. So, the next time I will try that. I did saute the peppers and added thinly sliced red onion.

Place eggs into medium sized bowl.
Add milk, onion relish, salt, and Wocestershire sauce.
Whisk this mixture until well combined.
Pour over the bread mixture.
Press down to ensure bread mixture is covered.
Cover with plastic wrap and refrigerate over night or for at least 4 hours.

Preheat oven 350º.
Bake for 45 to 55 minutes or until golden brown.
A knife inserted in center should come out clean.
Let cool for 10 minutes. 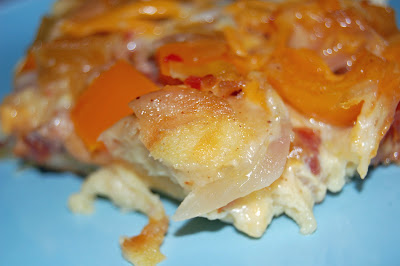 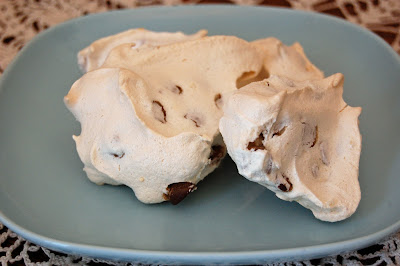 I went to a book fair a few months back and bought a load of cookbooks. Actually, I went two days in a row. This cookie name caught my eye. The texture was very interesting and very light. The recipe came from Eat your heart out. Cookies you can go to bed and they bake.

Preheat oven to 400º.
Grease cookie sheets well.
Chop nuts and set aside.
Beat egg whites at high speed until frothy.
Add salt and continue beating and add sugar, a bit at a time until stiff peaks form.
Add vanilla.
Fold in nuts and chocolate chips.
Using a heaping teaspoonful place batter on cookie sheet.
Place cookie sheets in oven and turn it off.
Leave in oven over night or for at least 3 hours.
They freeze well and thaw quickly.

Mine Shell Pasta with Creamy Smoked Bacon and Pea Sauce 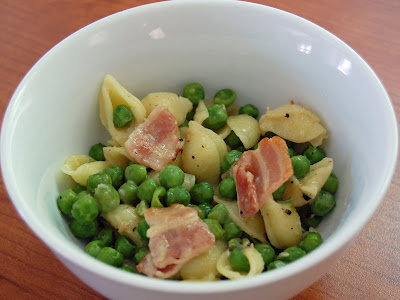 Yet another trip to the library to pick-up books I ordered, and of course you have to look to see if there is anything else you might like to take home. Jamie's Food Revolution was it. Looking through the book there are a number of very good recipes. I am always looking for recipes to take to work for lunch or dinner depending on which shift I am on. This is a great recipe, it heats up nicely in the microwave.

Prepare pasta according to directions.

In a large frying pan over medium heat add 1 tbsp. olive oil and butter.
Add bacon to pan, sprinkle with pepper and fry until golden and crisp.
If you are using mint, chop it finely.
When bacon is crisp add peas and toss.
Add cream and mint to bacon.
Drain pasta, save some of the pasta water.
Add pasta to bacon.
Add the juice of 1/2 lemon.
Let mixture bubble on heat until sauce reduces a bit.
Remove from heat.
If sauce is a bit to thick, add some of the pasta water.
Add Parmesan cheese and toss it. 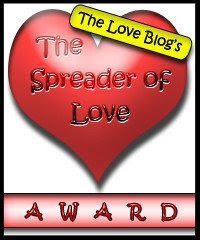